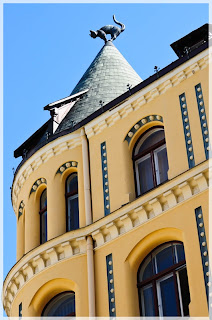 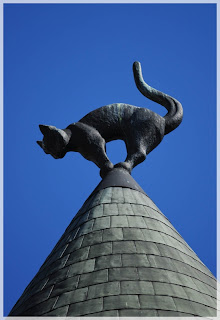 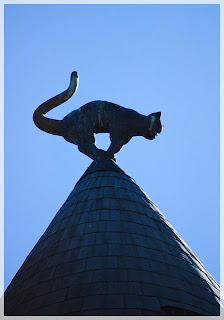 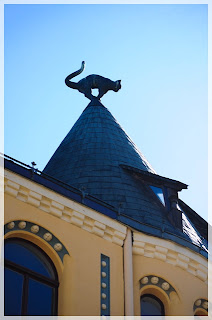 The Cat House is a building situated in old town Riga, the capital of Latvia. It was built in 1909 according to the blueprint of architect Friedrich Scheffel. The building is styled as medieval architecture with some elements of Art Nouveau. It is known for the two cat sculptures with arched backs and raised tails on its roof. It is said that the owner of the house wanted the cats to be placed with their tails turned towards the house of the Great Guild, which is nearby, as he held a grudge against its members. It was later ordered that cats should be turned to face the guildhouse.
The legend known by most Rigans, which is also told to tourists, comes in at least two versions. One version of the legend has it, that the wealthy tradesman who commissioned the building was refused membership of the Riga Tradesman Guild, mostly just called the Great Guild. The central element of both versions is the anecdote, that seeking retribution, the tradesman had two copper statues of angry-looking cats with arched backs and raised tails placed on the turret rooftops with their tails turned towards the house of the Great Guild, situated across the street.
The other and perhaps older version of the cat legend has it, that the wealthy tradesman placed the two statues of angry-looking cats on the building turret rooftops with their tails towards the Riga Town Hall, following a dispute with the Riga City Council, after which he urged the erection of the building. The Riga Town Hall at the time was in the same direction as the Great Guild, but it burned down during World War II, was demolished 1954 and only rebuilt at the very same place in the years 2000-2001.
References taken from here. :)
Publicat de Adela la 01:52